Most climate warming alarmists have recently  realised that it is now counterproductive to attribute every and all extreme weather events ( even cold snowy winters) to global warming and try to project a judicious objectivity by applying the cliche "weather isn't climate"  to both sides of the climate wars. In fact weather is an almost instantaneous slice through the climate space- time phase space and certain  patterns will occur more frequently on a cooling rather than a warming world.Here I will deal in the main with the USA because   each region will interact with the  warming or cooling changes in the great ocean and atmospheric current systems according to its particular topography and geography.
The basic principles are very simple. On a cooler earth the temperature gradient from the tropics to the arctic circle is steeper.This creates instability and the jet stream swings further North and South as opposed to its more West - East path during warmer periods.According to the season ,blocking highs may develop with  colder dryer air penetrating further South and warm moist air reaching further North. There can be enormous temperature and humidity contrasts  in the narrow boundary between these masses  as warm air is sucked in from the Gulf . Conditions alomg such a boundary are ideal for developing the wind shear necessary for the tornado swarm development seen recently in Oklahoma.The blocking highs also push hurricanes to the east so that hurricanes like Sandy are more likely to occur.Note that Sandy was not a powerful Hurricane  in fact it came ashore as a tropical storm. The big storm surge was the result of its long path over open water while a real cooling signal was seen in the development of blizzard conditions in the NW quadrant.This classic weather pattern is shown for today 6/02/13  in Figs 1 and 2 and occurs more often during a  cooling phase of the PDO and is often triggered by an E Pacific La Nina cooling. as seen in the 6/01/13  SST anomaly map  Fig 3
(TOH to The Weather Channel) It is worth noting that the pattern seen in Fig 1  is also  ideal for steering any Atlantic Hurricane which develops this season in a Sandy type direction.
Fig1 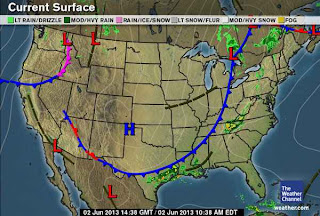 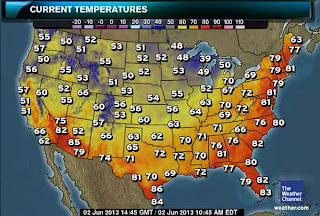 By contrast on a warmer world tropical SSTs are higher  EL Ninos more common and more powerful category 4 and 5 hurricanes  eg Katrina and Gilbert can develop .Their path is more E- W so that they  more frequently hit the Gulf Coast or even Central America.

More generally-  a cooling  earth is a dryer earth because the winds pick up less water vapour from the cooler oceans.In the USA the cool waters off  the West Coast  (fig3) will lead to more generalised droughts in the Center , West  and SW  and when combined with more frequent  late and early frosts and snows food crop production will be  threatened  .What rains do come will paradoxically come  from storms leading to flash flooding further restricting food production.In California itself the south will be dryer with more forest fires while in the North more of the rains will come as snow so that increasing snow pack will ameliorate the overall dryer conditions.
Most of the ideas expressed above were included in the post ""30 Years Climate Forecast"  in June 2010 on my blog at http://climatesense-norpag.blogspot.com. and revisited in June  2012 in the post "30 Year Climate Forecast -2 year update."
There has been no net warming since 1997 with CO2 up over 8%. The SSTs show a cooling trend since 2003.
The problem with the IPCC- MetOffice Climate models is that, apart from the egregious structural errors in the specific models, (assuming that CO2 is the main driver when it clearly follows temperature and adding water vapour as a feedback onto CO2 to increase the sensitivity) climate science is so complex that the modelling approach is inherently incapable of providing useful forecasts for several reasons -for starters the difficulty of specifying the initial conditions with sufficient precision. All the IPCC model projections and the impact studies and government policies which depend on them are a total waste of time and money. The only useful approach is to perform power spectrum and wavelet analysis on the temperature and possible climate driver time series to find patterns of repeating periodicities and project them forward. When this is done it is apparent that the earth entered a cooling phase in 2003-4 which will likely last for 20 more years and perhaps for several hundred years beyond that. For the data and references supporting this conclusion check the post “Climate Forecasting Basics for Britains Seven Alarmist Scientists” and several earlier posts on Climate Forecasting and Global Cooling especially "Global Cooling - Climate and Weather Forecasting" from 11/18/13.
Here is a  summary of the latest forecast based not on the particular  events referred to above but on the data and references linked in the series of posts  on the climatesense-norpag site.

"It is not a great stretch of the imagination to propose that the 20th century warming peaked in about 2003 and that that peak was a peak in both the 60 year and 1000 year cycles.On that basis the conclusions of the posts referred to above were as follows.
1 Significant temperature drop at about 2016-17
2 Possible unusual cold snap 2021-22.
3 Built in cooling trend until at least 2024
4 Temperature Hadsst3 moving average anomaly 2035 - 0.15
5Temperature Hadsst3 moving average anomaly 2100 - 0.5
6 General Conclusion - by 2100 all the 20th century temperature rise will have been reversed,
7 By 2650 earth could possibly be back to the depths of the little ice age.
8 The effect of increasing CO2 emissions will be minor but beneficial - they may slightly ameliorate the forecast
cooling and help maintain crop yields .
9 Warning !! There are some signs in the Livingston and Penn Solar data that a sudden drop to the Maunder
Minimum Little Ice Age temperatures could be imminent - with a much more rapid and economically disruptive
cooling than that forecast above which may turn out to be a best case scenario"

How confident should one be in these  predictions? The pattern method doesn't lend itself easily to statistical measures. However statistical calculations only provide an apparent rigour for the uninitiated and in relation to the IPCC climate models are entirely misleading because they make no allowance for the structural uncertainties in the model set up.This is where scientific judgement comes in - some people are better at pattern recognition than others.A past record of successful forecasting is a useful but not infallible measure. In this case I am reasonably sure - say 65/35 for about 20 years ahead. Beyond that, inevitably ,certainty must drop.