When analyzing complex systems with multiple interacting variables it is useful to note the advice of Enrico Fermi who reportedly said “never make something more accurate than absolutely necessary”. My recent paper presented a simple heuristic approach to climate science which plausibly proposed that a Millennial Turning Point (MTP) and peak in solar activity was reached in 1991.
The empirical temperature data is clear. The previous millennial cycle temperature peak was  at about 990. ( see Fig 3 in the link below)  The recent temperature Millennial Turning Point was about 2003/4 ( Fig 4 in link  below ) which correlates with the solar millennial activity peak at 1991+/. The cycle is asymmetric with a 650 year +/- down-leg and a 350 +/- year up-leg. The suns magnetic field strength as reflected in its TSI will generally decline (modulated by other shorter term super-imposed solar activity cycles) until about 2650.
The temperature increase since about 1650 is clearly chiefly due to the up- leg in the natural solar activity millennial cycle as shown by Lean 2018 "Estimating Solar Irradiance Since 850 AD" Fig 5 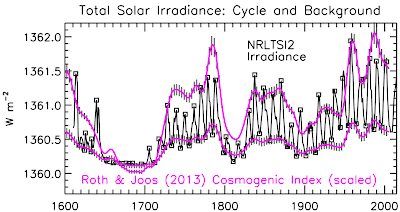 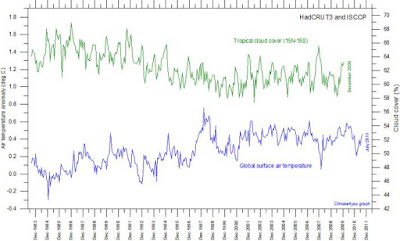 See the Energy and Environment paper
The coming cooling: usefully accurate climate forecasting for policy makers.
http://journals.sagepub.com/doi/full/10.1177/0958305X16686488
and an earlier accessible blog version at
http://climatesense-norpag.blogspot.com/2017/02/the-coming-cooling-usefully-accurate_17.html          See also the discussion with Professor William Happer at
http://climatesense-norpag.blogspot.com/2018/02/exchange-with-professor-happer-princeton.html
The establishment’s dangerous global warming meme, the associated IPCC series of reports ,the entire UNFCCC circus, the recent hysterical IPCC SR1.5 proposals and Nordhaus' recent Nobel prize are founded on two basic errors in scientific judgement. First – the sample size is too small. Most IPCC model studies retrofit from the present back for only 100 – 150 years when the currently most important climate controlling, largest amplitude, solar activity cycle is millennial. This means that all climate model temperature outcomes are too hot and likely fall outside of the real future world. (See Kahneman -. Thinking Fast and Slow p 118) Second – the models make the fundamental scientific error of forecasting straight ahead beyond the Millennial Turning Point (MTP) and peak in solar activity which was reached in 1991.These errors are compounded by confirmation bias and academic consensus group think.
Posted by Dr Norman Page at 2:16 PM 3 comments: