Over the last several years  it has become increasingly clear that the earth is not warming according to the IPCC model predictions (projections ) . Both Hansen and Trenberth recognise the problem.Hansen suggests that Chinese  pollution is counter balancing the expected surface warming and that this surface warming pause might continue for several decades to come.By contrast Trenberth suggests that the missing heat has gone mainly into the oceans and that the warming pause could  last for 15 - 50 years.  In addition Trenberth in a presentation at :


proposes  a strong natural negative feedback which has not been included in the IPCC- Met Office models and which independently of all the other evidence would necessarily substantially reduce model warming predictions.
By contrast there are a growing number of predictions of  Global Cooling based on declining solar activity. See  eg most recently  Steinhilber and Beer http://onlinelibrary.wiley.com/doi/10.1002/jgra.50210/abstract
In an earlier post   " Global Cooling Methods and Testable Decadal Predictions " on my Blog at
http://climatesense-norpag.blogspot.com   also at
http://wattsupwiththat.com/2013/04/02/global-cooling-methods-and-testable-decadal-predictions/

several predictions for future cooling were made - summarised as follows.
1. Significant temperature drop at about 2016-17

2. Possible unusual cold snap 2021-22
3. Built in cooling trend until at least 2024
4. Temperature Hadsst3 moving average anomaly 2035   - 0.15
5. Temperature Hadsst3 moving average anomaly 2100   - 0.5
6. General Conclusion – by 2100 all the 20th century temperature rise will have been reversed,
7. By 2650 earth could possibly be back to the depths of the little ice age.
8. The effect of increasing CO2 emissions will be minor but beneficial - they may slightly ameliorate the forecast cooling and help maintain crop yields .
9.Warning !! There are some signs in the Livingston and Penn Solar data that a sudden drop to the Maunder Minimum Little Ice Age temperatures could be imminent – with a much more rapid and economically disruptive cooling than that forecast above which may turn out to be a best case scenario.

Most western governments have developed economically costly climate and energy policies based on the premise  that CO2  sensitivity is about 3 degrees, and that CAGW can be avoided  by engineering  anthropogenic CO2 emissions to keep the temperature increase no more than 2 degrees.These policies make no sense if CO2 is not the main climate driver and if, in fact, the earth is entering an extended cooling spell because of declining solar activity.
As two of the main advocates of the CAGW paradigm and in view of their recent statements on the possible extended time span of the warming pause it would clarify the situation for policy makers and everyone else  if they could see their way clear to putting forward in its  most simple form their current predictions along the lines of points 1-9 above or most importantly,  and at least, items 4 and 5 - their most likely values for the Hadsst3 moving average (5 year) in 2035 and 2100.
The other points might merit a one or two word comment eg "absolutely not" or "possibly"
Drs Hansen and Trenberth  your  response to this request  would be most welcome . Thanks in advance Norman Page. 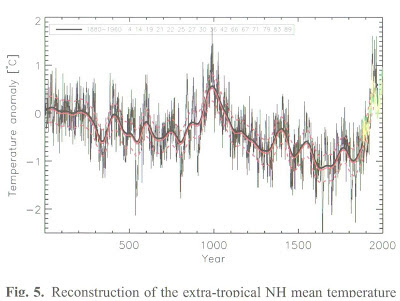 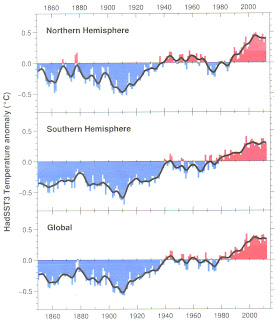