The End of the UNFCCC/IPCC Global Warming Meme is Confirmed by the Arctic Sea Ice .

The End of the UNFCCC /IPCC Global Warming Meme is Confirmed by the Arctic Sea Ice.

Planetary orbital and solar activity cycles interact and combine to drive global temperatures. Because of the thermal inertia of the oceans there is a 12+/- year delay between these drivers and global temperature. The amount of CO2 in the atmosphere is 0.058% by weight. That is one 1,720th of the whole atmosphere. It is inconceivable thermodynamically that such a tiny tail could wag so big a dog. The Oulu galactic cosmic ray count provides a useful proxy for driver amplitude.

The statements below are supported by the Data, Links  and Reference in parentheses  ( ) at     https://climatesense-norpag.blogspot.com/2021/08/c02-solar-activity-and-temperature.html 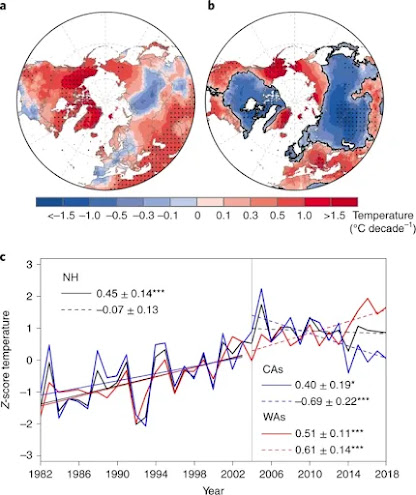 Short term deviations from the Millennial trends are driven by ENSO events and volcanic activity. 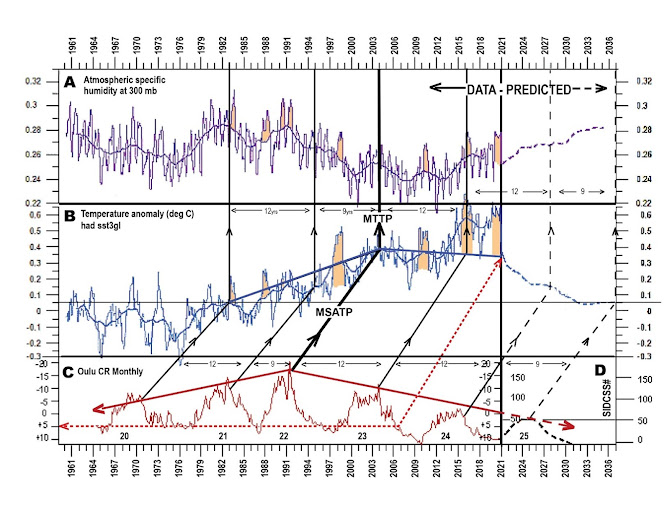 The Oulu Cosmic Ray count shows the decrease in solar activity since the 1991/92 Millennial Solar Activity Turning Point and peak There is a significant secular drop to a lower solar activity base level post 2007+/- and a new solar activity minimum late in 2009.The MSATP at 1991/2 correlates with the MTTP at 2003/4 with a 12/13 +/- year delay.  In Figure 2(5) short term temperature spikes are colored orange and are closely correlated to El Ninos. The hadsst3gl temperature anomaly at 2037 is forecast to be + 0.05. 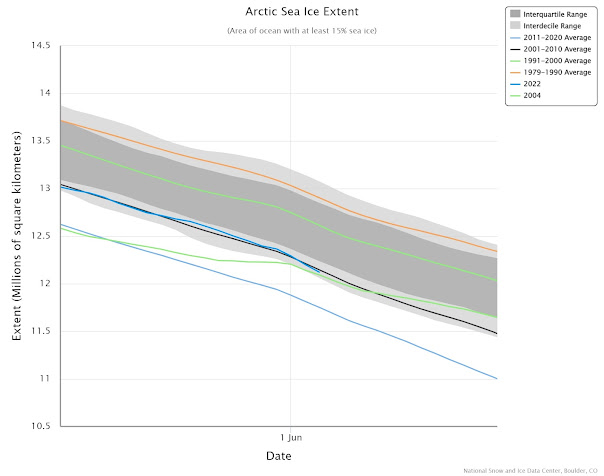 The current sea ice extent is a reflection of current arctic temperature integrated with  previous years.
Sea ice declined from orange1979 -1990 to lowest Blue line 2011- 2020 av. as temperatures warmed and modifying ENSO events occurred.. By 06/04/2022 ,truncated blue line, ice extent has   recovered close to that of 2001 - 2010 , Black line, which is also very close to the 2004 lower Green line  extent for the same day of that year. 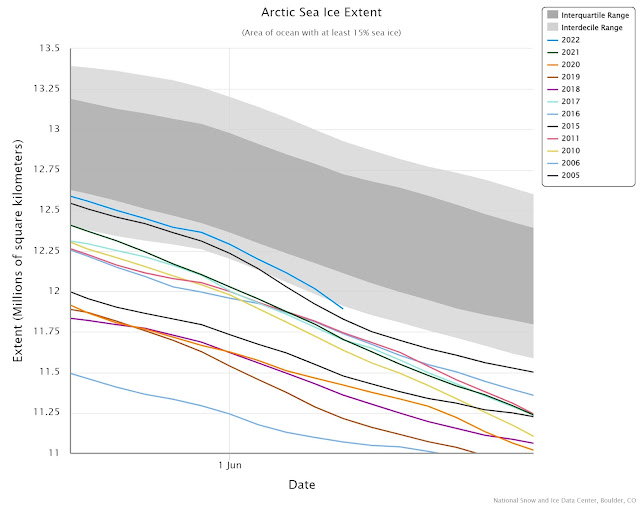 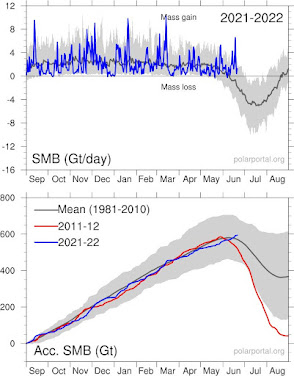 The accumulated SMB on June 22 2022 is greater than1981-2010 mean for that date. The September annual low projected from that trend is compatible with a Millennial sea level peak and turning point as suggested in section 4. 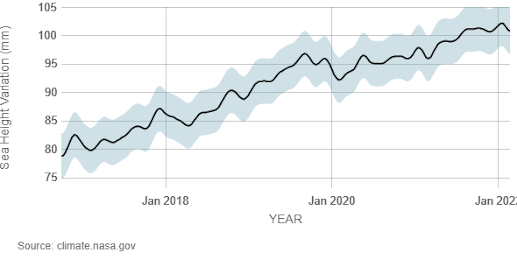 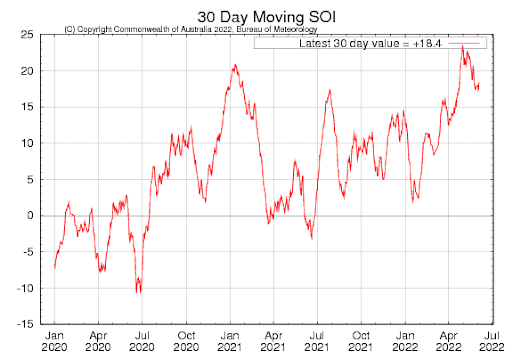 Sustained positive values of the SOI above +7 typically indicate La Niña (cooling) while sustained negative values below −7 typically indicate El Niño.(warming) Values between +7 and −7 generally indicate neutral conditions. Values at May 01 2022 indicate a possible strong  La Nina in Sept/Oct this year  leading to cooling. Conversely ,the solar activity of cycle 25 is increasing towards a 2024/5 peak with possible warming - Fig.2 D. We will see which trend dominates the fall 2022 sea ice minimum.    http://www.bom.gov.au/climate/enso/#tabs=Pacific-Ocean&pacific=SOI

The anthropogenic CO2 Radiative Forcing concept on which the climate models’ dangerous warming forecasts are based is inappropriate for analyzing atmospheric temperature changes. Solar sourced energy flows in and out of the Inter Tropical Convergence Zone provide the net negative feedback which has kept the earth within a narrow temperature range for the last 600 million years. The effects on temperature and climate of major meteorite strikes, periods of flood basalt outpourings , major volcanic eruptions and ENSO events are superposed on this solar sourced background.

Most importantly the models make the fundamental error of ignoring the long- term decline in solar activity and temperature which will follow  the Millennial Solar Activity Turning Point and activity peak which was reached in 1990/91 as shown in Figure 2. above.   The UNFCCC Renewable Energy Targets in turn are based on model forecast outcomes which now appear disconnected from any possible reality.

The global temperature cooling trends from 2003/4 – 2704 are likely to be broadly similar to those seen from 996 – 1700+/- (Fig3,23,24 ) From time to time the jet stream will swing more sharply North – South. Local weather in the Northern Hemisphere in particular will be generally more variable with, in summers more northerly extreme heat waves, droughts and floods and in winter more early fall and late spring frosts.

Modern industrial civilization, especially in large Megacities, cannot function for long without continuous adequate power supply, and functional global food and basic resource supply chains. The 2021 Texas freeze killed about 200 people. Long lines for food and water provided a red-flag warning of the present dangers of a cooling world. The war in Ukraine has given us a preview of future trends which were already underway. After only a few months of war nations are forced to abandon their rapid move away from fossil fuels. Food insecurity, starvation, global poverty and income disparity increases  threaten the UN’s Sustainable Development Goals. Cross border migration is out of control across the Rio Grande into the USA, and from West Africa via Libya to Europe and across the English channel. Loss of wildlife habitat to human habitation, cattle-ranching and ocean overfishing have accelerated species extinctions worldwide. Agricultural monocultures based on chemical fertilizer and insecticides have already decimated bird populations in the northern hemisphere.  Rosenberg et al 2019 in "Decline of the North American Avifauna" (39) says: "Integration of range-wide population trajectories and size estimates indicates a net loss approaching 3 billion birds, or 29% of 1970 abundance ...Steep declines in North American bird populations parallel patterns of avian declines emerging globally.”

Zaichun Zhul et al 2016 (36) in Greening of the Earth and its drivers report “a persistent and widespread increase of growing season integrated Leaf Area Index (greening) over 25% to 50% of the global vegetated area from 1982 - 2009. ………. CO2 fertilization effects explain 70% of the observed greening trend.” Policies which limit CO2 emissions or even worse sequester CO2 in a quixotic attempt to greenwash or mitigate these natural cycles would decrease agricultural food production and are antithetical to the goals of feeding the increasing population and bringing people out of poverty. The tropical rain forests and tropical oceans are the main source of the atmosphere's water vapor and the rainfall essential to life and agriculture on land. Potable and agricultural water supplies are now competing and stretched to their limits in many areas because of the demographics of global population increase. Temperature limits and targets as set in the Paris accords to ameliorate future temperatures are in practice useless when formulating policies relative to adaptation to the actual real world problems. These require more local inputs for particular coastlines, different major river basins and mountain range limited ecosystems.

The UNEP, IPCC and UNFCCC “consensus” scientific community’s unwarranted focus on future CO2 levels, and global warming mitigation via “net zero” energy policies has been adopted by most Governments, Mainstream Media, NGOs and leading politicians as the basis for climate and energy policy. Individual Governments will now decide where and how, given their different political systems and demographics, they will draw the line between accommodation for other species and natural ecosystems and food supply costs, poverty reduction, economic development and consumer consumption levels.

Humanity contends with all other species including COVID 19 and its variants in a Darwinian struggle for lebensraum. During the last major influenza epidemic world population was 1.9 billion. It is now 7.8 billion+/. The establishment science “consensus" that a modelled future increase in CO2 levels and not this actual fourfold population increase is the main threat to civilization has no empirical basis. The cost of the proposed rapid transition to non- fossil fuels would create an unnecessary, enormously expensive. obstacle in the way of the effort to attain a modern ecologically viable sustainable global economy. We must adapt to the most likely future changes and build back smarter when losses occur.