The Epistemology of Climate Forecasting for 8 Year Olds and the Coming Cooling.


"If you cannot explain your finding to an [attentive] eight-year old, you don’t understand it yourself."

2.  Granddaughter - You asked - Is the world going to burn up and how do we know?
Ava - Lets  think about when  the temperature is warmer and colder outside. It is hotter when the sun shines during the day and colder at night when our part of the earth is turned away from the sun .You know already that it takes 24 hours for the earth to turn around once to make what we call a cycle from warm to cold and back again.
You also know that it is much hotter in summer than winter and that is because the sun shines longer   and is higher in the sky in summer than in winter. Each year there is a cycle  from warm to cold and back again which takes 365 days.Scientists have  measured or estimated in various ways what the earth's temperature was  back for hundreds and thousands of years and  can see that there are other hot - cold cycles. Two of the most important ones have cycle lengths of about 60 and 1000 years. Here is a picture showing some of the 1000 year cycles. 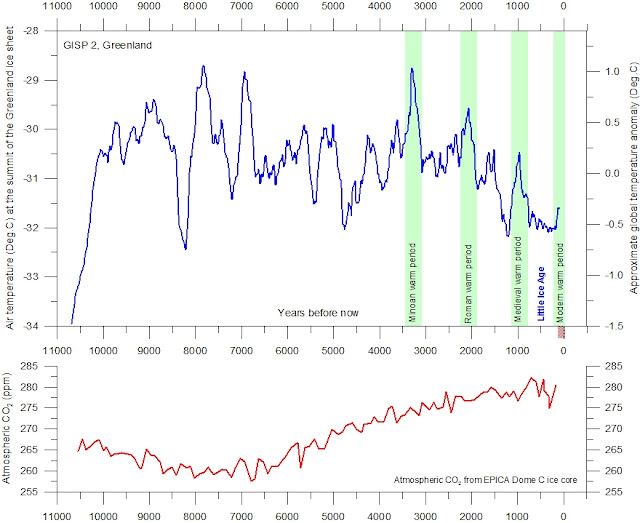 To know what is going to happen in the future we first  have to know where the earth is in the 1000 year temperature cycle. Here is another picture that shows what the temperatures were in the northern part of the earth over the last 2000 years. Look especially at what happened during the last 1000 years.
Fig 2  http://www.clim-past.net/8/765/2012/cp-8-765-2012.pdf 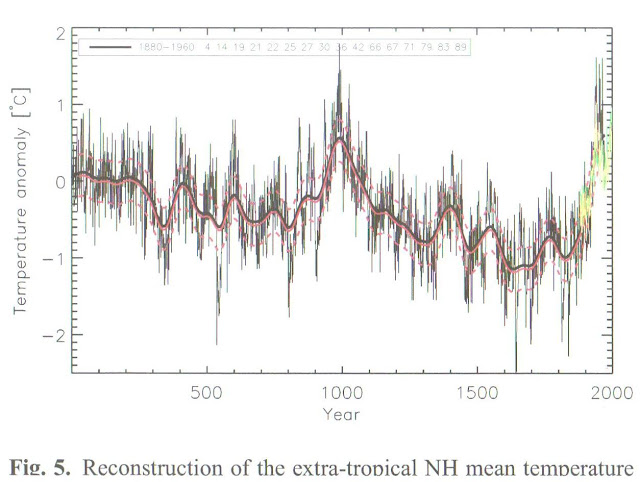 See the warm peak at the year 1000 - then look where we are now at the right hand side of the picture. You can see that the earth is just getting near to, is just at or just past the peak warmth of a 1000 year cycle.
How can we tell which it is. We know that the amount of sunshine which reaches our bit of the earth often changes the temperature by tens of degrees between night and day and as much as 100 degrees sometimes between cold winter nights and the hottest summer days. We also know that the sun itself puts out more energy and its magnetic field is stronger at the activity peaks of its various  cycles.
What is the sun doing now? Here is a picture that shows us what has been going on.
You can see that sun itself also has cycles of activity of 11-12 years in length. When the red line gets nearer to the bottom of the picture the sun is more active, its magnetic field is stronger and fewer Galactic Cosmic Rays hit the earth. 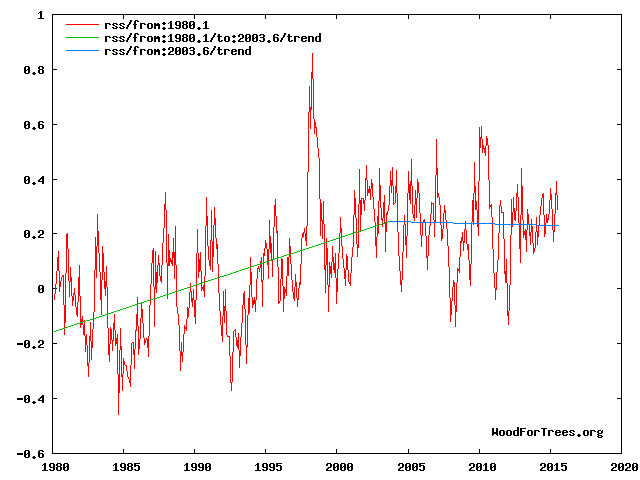 "Although the observed global-scale warming experienced over the past ~100 years is compatible with model estimates of the magnitude of the greenhouse effect, unequivocal, statistically convincing detection of the effects of changing CO2 and trace gas levels on climate is not yet possible. An important problem in the positive identification of a greenhouse gas effect on climate is to explain the medium to long time scale (~decades or more) fluctuations in the past record. Attempts to model such changes have, to date, suffered from a number of deficiencies."

Ava - In other words they couldn't prove  any effects of man made  CO2 on climate.

But whoever  wrote the official summary statement and recommendations said:
"As a result of the increasing concentrations of greenhouse gases, it is now believed that in the first half of the next century a rise of global mean temperature could occur which is greater than any in man's history. "
The report made two important recommendations. As a result of one ,the Intergovernmental Panel on Climate Change was set up to select from the  evidence and from time to time produce reports which would show that CO2 was the main driver of dangerous climate change and a second recommendation resulted in a meeting in Rio in 1992 chaired by Maurice Strong himself which produced the United Nations Framework Convention on Climate Change , later signed by 196 governments.
The objective of the treaty is to keep greenhouse gas concentrations in the atmosphere at a level that they guessed  would prevent dangerous man made  interference with the climate system.
This treaty is really a comprehensive, politically driven, political action plan called Agenda 21 designed to produce a centrally managed global society which would control every aspect of the life of every one on earth.
It says :
"The Parties should take precautionary measures to anticipate, prevent or minimize the
causes of climate change and mitigate its adverse effects. Where there are threats of serious or
irreversible damage, lack of full scientific certainty should not be used as a reason for postponing
such measures"

In other words if the models show there  is even a small chance of very bad things happening the Governments who signed the treaty should act now  to stop it. But how good are the  computer Models?
The successive five  reports of the IPCC  in the Summaries for Policymakers written by Government representatives  have clamed increasing certainty for the outcomes of their Model based projections  of future temperature which is not supported by  the Science sections of the reports or the actual data.

Remember the Villach meeting said
"in the first half of the next century a rise of global mean temperature could occur which is greater than any in man's history."
All the models and projections made since 1985  were built in the assumption that CO2 was the main climate change driver- for that and for many other reasons they are in reality useless for forecasting future temperatures.
Here is a picture of what really happened as CO2 levels rose rapidly in the 21st century 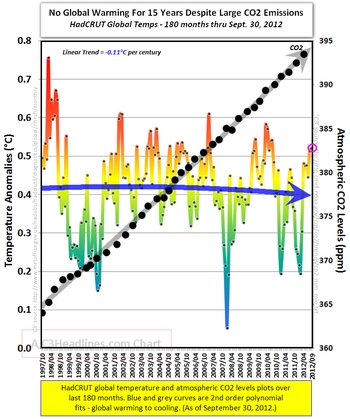 As you can see there has been no global warming at all since about 1997.
The climate models on which the entire Catastrophic Global Warming delusion rests are built without regard to the natural 60 and more importantly 1000 year cycles so obvious in the temperature record. The modelers  approach is simply a scientific disaster and lacks even average commonsense .It is exactly like taking the temperature trend from say Feb – July and projecting it ahead linearly for 20 years or so. They back tune their models for less than 100 years when the relevant time scale is millennial. This is scientific malfeasance on a grand scale.
The temperature  projections of the IPCC -  UK Met office models and all the impact studies which derive from them have no solid foundation in empirical science being derived from inherently useless and specifically structurally flawed models. They provide no basis for the discussion of future climate trends and represent an enormous waste of time and money.  As a foundation for Governmental climate and energy policy their forecasts are already seen to be grossly in error and are therefore worse than useless.
Here is a picture which shows the sort of  thing  they did when they projected a cyclic trend in a straight line.. 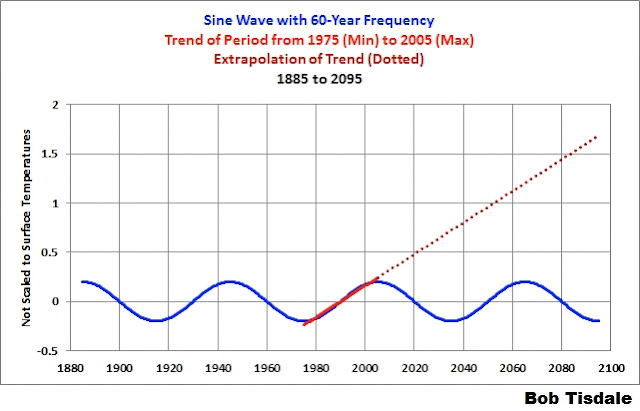 A new forecasting method needs to be adopted. For forecasts of the timing and extent of the coming cooling based on the natural solar activity cycles - most importantly the millennial cycle - and using the neutron count and 10Be record as the most useful proxy for solar activity check my blog-post at
http://climatesense-norpag.blogspot.com/2014/07/climate-forecasting-methods-and-cooling.html
(Section 1 has a complete discussion of the uselessness of the climate models.)

"In the Novum Organum (the new instrumentality for the acquisition of knowledge) Francis Bacon classified the intellectual fallacies of his time under four headings which he called idols. The fourth of these were described as :
Idols of the Theater are those which are due to sophistry and false learning. These idols are built up in the field of theology, philosophy, and science, and because they are defended by learned groups are accepted without question by the masses. When false philosophies have been cultivated and have attained a wide sphere of dominion in the world of the intellect they are no longer questioned. False superstructures are raised on false foundations, and in the end systems barren of merit parade their grandeur on the stage of the world."
Climate science has fallen victim to this fourth type of idol.
http://www.sirbacon.org/links/4idols.htm )