Desperate Times for the CAGW believers as Earth begins to Cool.

There is a new Science Magazine  paper by Steinmann Mann and Miller:
Atlantic and Pacific multidecadal oscillations and Northern Hemisphere temperatures
http://www.sciencemag.org/content/347/6225/988
This paper  recognizes that there are serious differences between the NH, N Pacific  and N Atlantic SST model runs and the observed temperatures. The authors  are particularly concerned to explain the recent "Pause". They subdivide the ocean system  into three separate regional components  which they label AMO,NMO and PMO ( somewhat redefined AMO NAO and PDO )
Basically what the paper does is to  calculate the  differences  between models and observations  and then attribute   the difference to an unexplained "internal variability" in the ocean temperatures. The authors conclude that internal multidecadal variability in NH SST temperatures accounts for the discrepancy between models and observation  and also  that it likely offset anthropogenic warming over the last decade . They add  that this effect will reverse ( at some unspecified date) and add to anthropogenic warming in coming decades.
The AMO PMO and NMO curves in their figure 3c show, more or less, the  well known 60 year periodicity in the temperature data. see Figs 15 and 16 at
http://climatesense-norpag.blogspot.com/2014/07/climate-forecasting-methods-and-cooling.html
In other words they are trying to improve the models and save the model forecasts by adding to them
the effects of the PDO ,AMO and NAO.
Unfortunately they continue to make the egregious schoolboy error of  tuning their models back about 160 years when the main periodicity is millennial. (Figs5-9 at the link) The recent pause is  more accurately described as a cooling since 2003 which date represents a peak in both the 60 year and 1000 year periodicities. I estimate that the cooling trend  of the millennial cycle will reverse in about 2650. 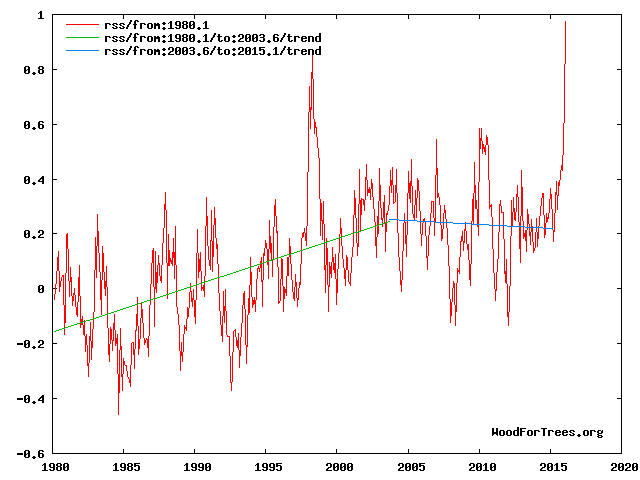 http://www.woodfortrees.org/plot/rss/from:1980.1/plot/rss/from:1980.1/to:2003.6/trend/plot/rss/from:2003.6/trend
That the Steinman et al paper got through peer review for Science Magazine says much about the current state of establishment science. However in a short comment on the paper in the same Science issue  Ben Booth of the Hadley center does sound a refreshingly cautionary ( for Science Mag and Hadley )  note saying that the paper is only useful if the current models accurately represent both the external drivers of past climate and the climate responses to them and that there is reason to be cautious in both of these areas. This comment is an encouraging sign that empirical reality may be finally making an impression on the establishment consciousness. If the expected sharp cooling in 2017-2018 suggested by the drop in the Ap index and Neutron Monitor data in Figs 13 and 14 of the post linked  above actually occurs it should just about finish off the whole CAGW meme.